Martin Clunes, star of the TV series Doc Martin, is on a quest to discover the islands of Australia. There are over 8000 to choose from and in this 3 part series Martin visits sixteen of the best. They are a cross section of what island life is all about; islands that express the diversity, the history and the challenges of life on islands Down Under.

Martin’s journey begins in Australia’s most iconic city – Sydney. In the middle of Sydney Harbour lies Fort Denison, an island that symbolises the city’s colonial past. This is Martin’s jumping off point as he heads for the subtropical paradise of Lord Howe Island, approximately 600 kilometres from the mainland. It’s been settled by humans for less than 200 years and, as a result, it’s astonishingly pristine. Then on to Norfolk Island to learn about its brutal convict past and its proud present, meeting descendants of the Bounty mutineers. From Norfolk up to Restoration Island to meet a modern day Robinson Crusoe and his dingo, then on to Thursday and Friday Islands, tropical home of music and pearls. Over to the Tiwi Islands for some bush tucker and Aussie footie. On to the magical Murions where Martin discovers the Ningaloo Reef and swims with the biggest fish in the ocean: the whale shark. Then the Abrolhos Islands to hear a tale of bloody mutiny and to catch a lobster. Down to Rottnest where, amongst the tourists, Martin discovers a dark past and some friendly marsupials. Next Martin travels by boat to the mysterious Island of Carnac, home to hundreds of one of the world’s most venomous snakes. Mundoo in South Australia is next for some high energy cattle mustering. Phillip Island is where Martin handles a fairy penguin and races at top speed in a Mini Cooper. On King Island he helps to gather storm-driven bull kelp on the beach. And finally to Maria Island and Tasmania where Martin learns about the race to save Tasmanian Devils from extinction.

“I’ve always been fascinated by islands, each one a microcosm that tells us something different about our world. And Australia’s islands have it all: exotic creatures, spectacular marine life, and of course the different people who inhabit them. Whether they’re relative newcomers or they’ve lived there for generations, these are the resourceful, extraordinary people who call these islands home. This is my voyage around the adventure playgrounds, the best-kept secrets and the astonishing surprises of the Islands of Australia.” –
Martin Clunes 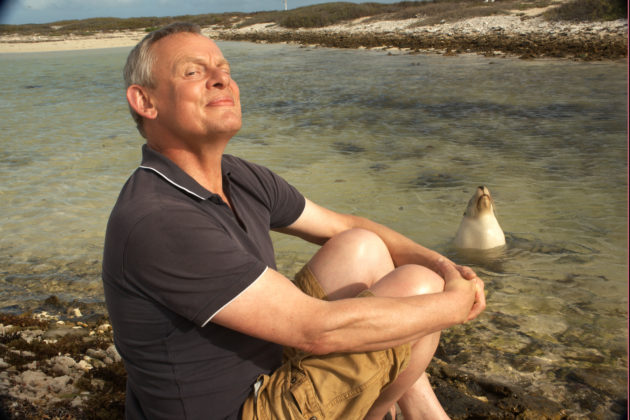